Over the course of the last two months, I asked anyone who plays the game, who do you want to see in Marvel Heroes? Those surveyed were asked to supply their top 5 picks for either characters, NpCs, or villains. The results were interesting and wildly varied,but there were a few overwhelming (and rather obvious) favorites  as well as a couple of obscure characters. Here are the tallied results. This one went right down the middle....the people want to go toe to toe with the biggest and baddest. Not shocking that these two would be at the top, but a little surprising how evenly favored they are! Honestly, at least one of these bad boys showed up on all but two lists, with most lists having both!
Either one of these would open up a whole world of possibilities. Just off the cuff,Apocalypse could feature in a Clan Akkabha setting or a full Age of Apocalypse side chapter or One Shot. Thanos could have a featured One Shot in the Cancerverse (hey,they already gave us Cancerverse Hulk!)  or a myriad of other invasion story-lines for main story mode. Both big bads should of course be complemented with their signature underlings (Four Horsemen  and  the Black Order, at minimum, respectively).
It is a tall order,for sure,but here is hoping that Gazillion listens and gets cooking!

I'll admit, this was totally unexpected. I am not a fan of this character, but I do not dislike  him/them either. Fantomex is just kind of there for me, but apparently this faux French thief has stolen a lot of hearts. He came up on more than  half of the lists, with most wanting him playable, some just wanting him around in game. 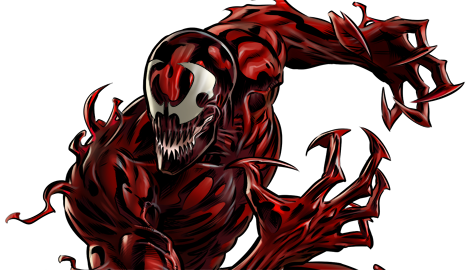 This one got a lot of votes,in varying spots of favor. The reasoning behind him is pretty easy to peg: we have Spiderman, we have Venom....now let's get the big bad that really made them put aside their differences. The only hold up on this is that Carnage is a fiiiiine line, almost too adult-situational for the game...but if they could get him in the comics in '90s, I am sure they can shoehorn him in easily enough. With the recent events in the comics (Axis), a playable Carnage could even be possible.

UPDATE: Literally ONE day after the original write up of this article, Gaz announced the upcoming MH2015 teamups....one of which? You guessed  it! Gaz hears us, it seems.

Talk about a dark horse favorite. As a fan of DH, in any incarnation, I can get behind this one in a blink. However,I wouldnt be too optimistic about getting him as anything but an NPC in the near future; even that is a longshot. Still, everyone's favorite Freelance Peace  Keeping Agent would be a huge shake up and a breath of fresh air, yes?

-JIGSAW/BUSHWHACKER/THE RUSSIAN
Names that came up in a frequently recurring theme: Punisher villains. I put them together as they each got two to four votes by name, not amounting to much alone. These guys could fit just about anywhere and would be a nice addition to the Big Bad meat-bags gallery.

-RAOUL BUSHMAN
Apparently there are a good many Moon Knight fans out there, and they want their MK vs Bushman throw-down. Not a bad idea, not one of my first choices, but certainly would be welcome.

-TERROR INC.
WOW! I had all but completely forgotten about this guy! With ONE vote only,apparently I am not the only one who forgot him. Well someone remembered ya! Interestingly,with a power set that could be compared (loosely) with Rogue's, he could actually be made. Apologies to D., however, but I honestly do not see this one happening any time soon.